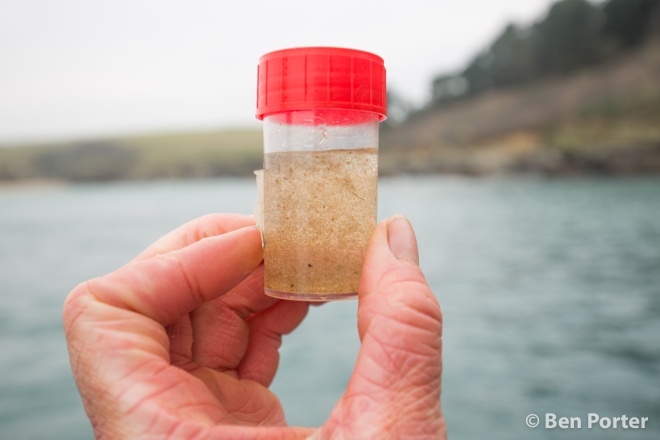 Last Saturday I joined a group of students from uni aboard the Free Spirit to carry out a series of surveys in the Fal Estuary, sifting through the water column to assess the level of microplastics polluting this rich ecosystem.

Rugged up in innumerable thermal layers and equipped with sampling pots, two cone-shaped plankton nets and ample enthusiasm, we set out into a biting easterly wind to see what we could find…

The River Fal (or Dowr Fala in Cornish) forms an extensive network of creeks, rivers and estuarine habitats covering a surprisingly large area.

Bubbling up from the hills of Goss Mor in the north,the mouth of this river enters the English channel beside Falmouth in the west, after passing through a diverse range of habitats along the way. Muddy river creeks and drowned river valleys are lined with rich sessile oak woodland; willow and alder carr abounding in the damper areas.

The result of this tapestry of habitats is an amazing diversity of wildlife, which is always brilliant to encounter on our regular trips up the estuary aboard AK Wildlife Cruises‘ Free Spirit.

Today, though, the focus of our trip was different. Whilst we were noting down the diversity of winter wildlife we did encounter, our primary focus was to carry out standardised microplastic surveys as part of a new initiative to gain some baseline data on this worrying form of pollution.

speeding out into the Carrick Roads

Birding in the river creeks

We sped through the Carrick Roads and into the shelter of the Roseland Peninsula, scanning the river mouth for the divers, grebes and mergansers that rely heavily on this area for overwintering habitat. We enjoyed some great views of Black-necked and Slavonian Grebes bobbing in the water, which we duly noted down and marked in the GPS database as part of the long-term monitoring carried out by AK Wildlife Cruises.

The tide was at it’s peak mid-morning, so we made haste to make it to the farthest reaches of the river before these creeks dried out with the ebbing tide. We were treated to fantastic views of grey seals, a surprising herd of some 60 fallow deer in the neighbouring Trelissick estate, and an abundance of estuarine birds such as little egrets, grey herons, greenshanks, shellducks and curlews. It was especially enjoyable to hear the burbling call of curlews echoing out across the mudflats…a call definitely secured as an all-time favourite for me!

We reached the inland limit of where we could get to without grounding into the mudflats, and so turned 180′ and headed to our first sampling location: where rivers from the Fal and Truro meet. We all jumped into action to get our first survey underway: two plankton nets, made of fine mesh and cone-shaped, were deployed on our Port and Starboard sides. We eased out about 20 metres of rope before tying the nets off, and then slowly towed these through the water for 15 minutes. GPS coordinates of our location were scribbled down on the datasheets, allowing us to return to this site in the future to carry out another survey as a comparison. 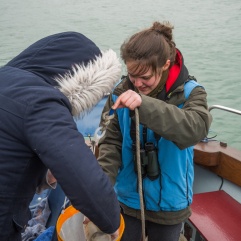 After 15 minutes, we hauled in the nets (bitterly cold on the hands for the unfortunate ones on rope duty!) and examined the result of our first survey: emptying the contents of a small collection pot at the end of the net into our sampling pots for closer inspection. What could we see? Well, fairly brown-looking water with a lot of silt and not much else! But we allowed the sediment to settle before having a closer look, and could spot a few insidious interlopers that were definitely not of natural origin: bright little fragments of plastic and even smaller polyester microfibres.

We chugged our way slowly out of the river system and out towards the open sea, carrying out three more surveys along the way: one in the entrance to the River Fal in the Carrick Roads; one off St Mawes and the Roseland heritage coast, and another as we entered back into Falmouth Docks. The most surprising finding in the samples here was the sheer abundance of zooplankton! Each sample was brimming with a seething mass of these tiny organisms that form the base of the food web supporting many rich marine ecosystems. We could again see evidence of microfibres and microplastics in amongst them, but without specialist equipment it was hard to quantify their abundance.

It was very interesting to carry out the first of our microplastic surveys, revealing what invisible pollutants may be lurking in the waters around our precious coastline here in Cornwall. We hope to analyse these samples back in the lab, shedding light on the exact amount and nature of the plastic pollutants we discovered.

Fingers crossed the easterly winds will ease off enough in the next couple of weeks to allow us to head back out and sample some sites offshore…watch this space!

Many thanks to AK Wildlife Cruises for agreeing to collaborate with the university and several of the campus societies such as EcoSoc and Student Seaquest to carry out these surveys.

3 thoughts on “Sifting the Unseen”

“Any naturalist who is lucky enough to travel, at certain moments, has experienced a feeling of overwhelming exultation at the beauty and complexity of life, and a feeling of depression that there is so much to see, to observe, to learn, that one lifetime is an unfairly short span to be allowed for such a paradise of enigmas as the world is”

Welcome to my blog.

I’m a young naturalist from a small, windswept island off the north Wales coast called Ynys Enlli. My passion lies in the natural world: from insects and mosses to birds and bats.

Understanding their ecology, and capturing their beauty and  fascinating behaviours brings me unending enjoyment.

This blog is a place for musings surrounding explorations in the field, observations and (attempts at) nature writing.

The Blog of Travel

Motorbikes, dogs and a lot of traveling.

My thoughts on stuff...

Musings of a Marooned PhD Student

Updates from a volcanic islet

Ecology for the 21st Century

Thoughts on photography and other things by Jeremy Moore.

The views and photographs of Adrian Colston

“Of all the paths you take in life, make sure a few of them are dirt” — John Muir